It’s not often that a club can go from having only four members – none of whom have any competitive experience – to competition-ready in less than a year. For that same club to win? That’s the legacy of the University of Washington SAMPE team. 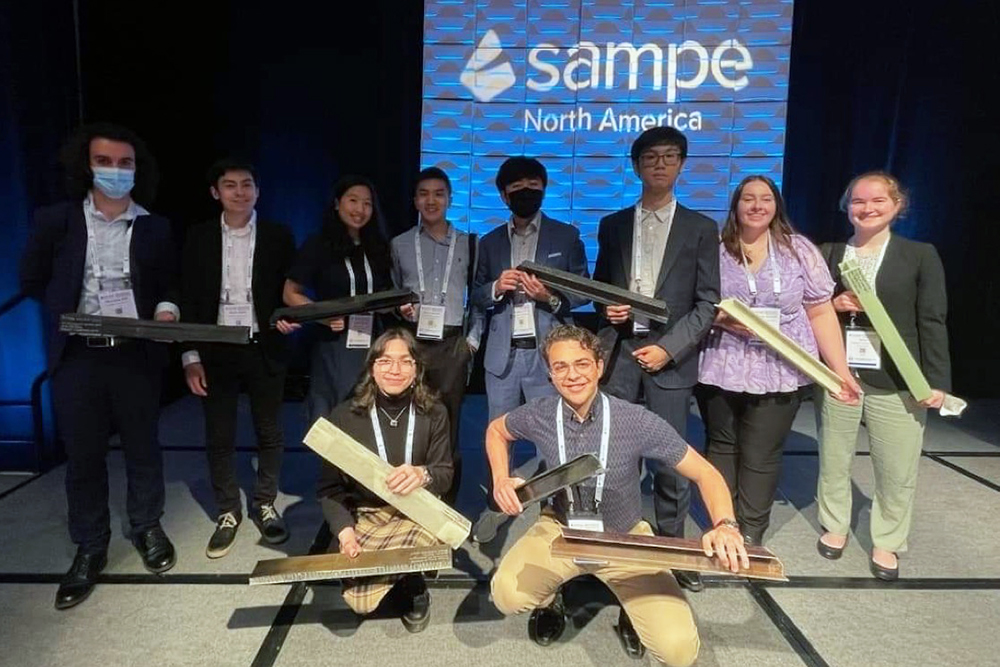 At their annual conference, the Society for the Advancement of Material and Process Engineering (SAMPE) hosts a competition in which student teams from all over the world design and build a model bridge using composite materials. Those bridges are then put through a series of mechanical tests to see how well they can withstand various external forces. It’s a fun and challenging contest that the student chapter of SAMPE at UW enjoyed working toward and competing in every spring.

Every spring, that is, until the pandemic hit.

“Once things were shut down, the uncertainties of the future of the club just grew and grew,” said mechanical engineering student William Rae. The annual conference had been cancelled, so there was no longer a specific year-end goal to focus on. Then came the news that campus would remain closed for the fall 2020 quarter, meaning no opportunities to get into the lab and build. “We realized that we were going to have to try pretty hard if we wanted the club to stay around,” said Rae.

“We attempted virtual tours of companies, industry panels, online tutorials of computer-aided design software, and various projects,” said Alexander Hicker, a master’s student in MSE. “Unfortunately, it was difficult to recruit and keep people interested since the core activity of composite processing was unavailable.”

Composite processing is a critical research focus of materials engineering. The properties of composite materials – like carbon fiber and fiberglass – are a result of how they are processed. A lot of time and practice goes into figuring out which processes and manipulations maximize the strengths of a particular material, while minimizing its weaknesses. In order to better understand the properties of the materials they work with, UW SAMPE members participate in practice builds and mini competitions, creating skateboards, ski equipment, car parts, and even throwable carbon fiber “paper” airplanes. These kinds of practical activities are largely what entice students to join the club. 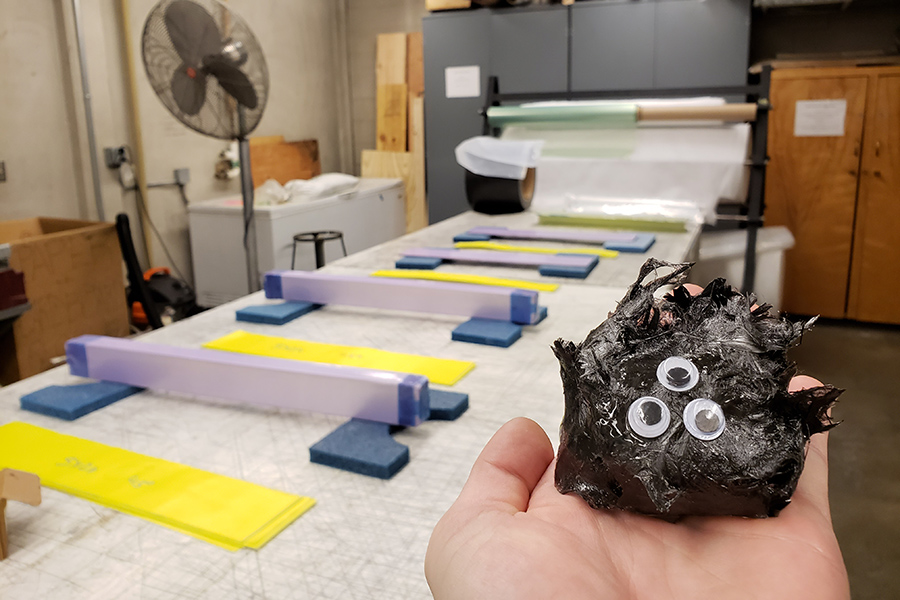 “I was originally drawn to the hands-on building and getting to break structures and identify why they broke. To this day, being able to break beams and make better ones based on the results is still my favorite part [of the club],” said Jordan Hatch, an MSE master’s student. The technical knowledge and experience gained can give members an advantage when looking for jobs or internships in industry, which is why being able to get into the lab and build together is so crucial.

By spring 2021, the club was allowed to have small in-person gatherings on campus and attempted to restart traditional activities, but COVID restrictions limited their ability to give new members the building experience they needed. When it became clear that the SAMPE conference would be cancelled for 2021 as well, the club was determined to find another way to put their skills to use. Hatch was in contact with a member of the UW Bothell Society of Manufacturing Engineers (SME), and the two groups united to put on an internal competition.

“I was missing the hands-on experience, especially because the majority of my undergraduate degree was online. I missed a lot of the hands-on labs due to classes being remote,” said Kendall Johnson, a member of UW Bothell SME. The joint internal competition inspired Johnson to join UW SAMPE, just as the club experienced yet another setback. Most of the club leadership graduated that spring, leaving only four active members: Hicker, Hatch, Johnson and Rae, all of whom had to take on officer positions to keep the club alive when in-person classes resumed.

“We were dropped into leadership roles that we had some exposure to online but that was all different in person,” said Hicker, who had been appointed club president. “Our experience was limited, so there was a trial-and-error process for everyone, officers included.” 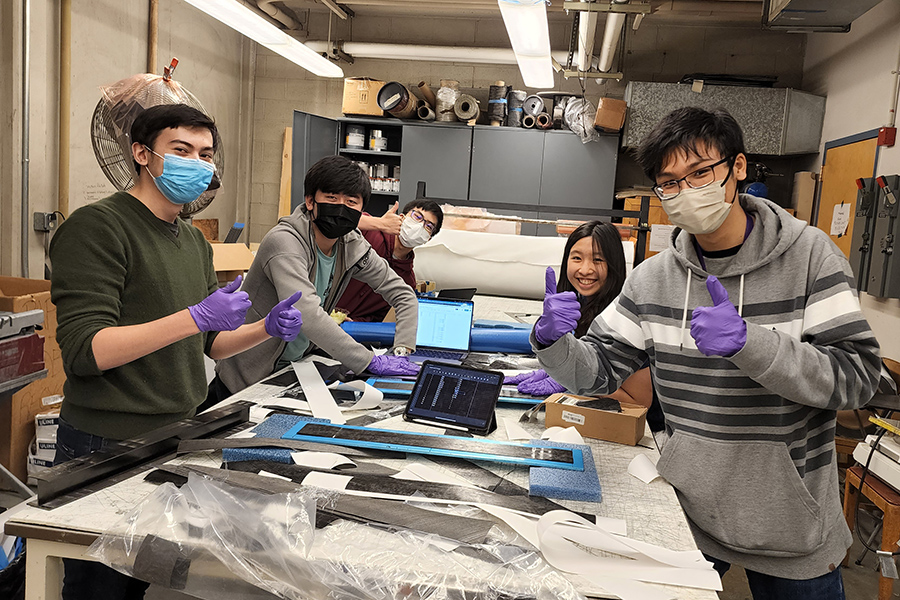 The challenges they faced seemed never-ending. They needed more members. After two years spent away from the lab, many of their building materials had expired, and there was little funding available to purchase more. They had one element going in their favor, however: the bridge competition was back on for spring 2022. Even though their practical skills were rusty, none of them wanted to miss out a third time. Determined, they ran head first into the fall 2021 quarter.

Hicker leveraged his TA role to recruit students interested in the hands-on building experience. Rae figured out how to balance in-person lab activities with COVID compliance. Johnson used industry contacts from her internship at Hexcel to network her way into some materials donations. Hatch wrote grant proposals and researched aid opportunities in hopes of securing enough funding to take as many members as possible to the in-person conference in Charlotte, North Carolina. All of them had to quickly re-familiarize themselves with laminate theory and failure analysis to be able to effectively train their new members to create the structures necessary to submit to the bridge contest.

“It was coming down to the wire for competition, and we had four out of four structures we were going to use for competition fail. It required many hours of work,” said Hicker.

“The competition wouldn't have been possible without the help of the new generation of students,” said Hatch. “There was a lot of emphasis in the fall and winter on investing time into teaching how to manufacturer and process composite structures so that we could get to the point in spring that they are mostly self-reliant.”

Their tenacity paid off. Ten of their 17 members were able to attend SAMPE 2022, and the team returned home with the coveted SAMPE Student Bridge Champion trophy.

“In the end, it is all about educating students while having fun making things,” said Hicker. “It was the dedication and passion of all the students that made this year what it was.”