Each autumn, winter, and spring quarter, the department presents a series of weekly seminars on a broad range of interests, industries, and professions. MSE students and alumni are encouraged to attend. Graduate students are required to attend and receive MSE 520 credits for attending. Energy critical elements are defined and identified. Energy technologies affected are briefly discussed. The presentation then focuses on critical elements for the lithium battery industry and a discussion of cobalt, nickel, carbon, and fluorine. There is brief mention of the recycling of lithium-ion batteries which is not yet economically viable.

Walter van Schalkwijk has more than 30 years of experience in the battery industry in research, product development, manufacturing, battery electronics, applications engineering, battery system design, and business development for batteries and battery materials. His research supports advanced batteries for the tech industry, including power sources for mobile and wearable technologies, and electrochemical devices that enable reliable operation of data center infrastructure. He has been under contract as Microsoft’s “Principal Battery Scientist” since 2016 and is also under contract to Duracell Corporation as a battery manufacturing specialist.

Dr. van Schalkwijk’s edited volume, “Advances in Lithium-Ion Batteries,” is one of the foundational books for the field. In addition to papers and patents in battery technology, he also has patents in the field of kidney dialysis with local company, Advanced Renal Technologies. Dr. van Schalkwijk is also an affiliate Professor of Chemical Engineering at the University of Washington. Lastly, I will show a Li-S developmental example for DOE Battery500 program and how we can further improve its performance.

Dr. Mei Cai is a GM Technical Fellow and the manager of the Energy Storage Materials Group. With more than 20 years of industrial R&D experience and extensive experience in novel materials processing for automotive applications, she has managed multimillion-dollar R&D projects in the development of low-cost and durable vehicular energy storage materials/systems. Mei is recognized as 2018 Asian American Engineer of the Year for her contributions in both fundamental research and technology development. She is the author or co-author of over 100 scientific publications and hold 85 issued US patents with additional 100+ pending patent application. Her research has received over 8,600 citations and has an h-index of 47 (google scholar) over the years. Although 70-80% of disease target space resides within the intracellular compartment of cells, many biologic and poorly lipophilic drugs have limited access to these targets. We have developed polymeric drug carriers for protein and nucleic acid biologic drugs that contain active endosomal releasing mechanisms and activities to enhance intracellular target access. More recently we’ve developed a new platform for small molecule drug therapies that work against intracellular infectious disease reservoirs. These macromolecular prodrug therapeutics display improved targeting and pharmaco-kinetic profiles that can be tuned and engineered to match antibiotic requirements. We have initially developed this platform termed “drugamers” against pulmonary intracellular infections where they have shown excellent activity against highly lethal aerosolized tularemia and melioidosis disease models. The platform has been further broadened to include other infectious disease targets such as malaria and HIV, as well as for oncology drug therapy.

Lastly, I will show a Li-S developmental example for DOE Battery500 program and how we can further improve its performance.

Dr. Stayton is the founding Director of the Institute for Molecular Engineering and Sciences and the Center for Intracellular Delivery of Biologics. His own eclectic research group works at the interface of fundamental molecular science and applied molecular bioengineering. He is a co-founder of the startup companies Jewel Biotherapeutics based on their cell and drugamer therapy work, PhaseRx Inc. based on his group’s biologic drug delivery work, and Nexgenia Inc. based on their biopharma manufacturing technologies.

Dr. Stayton has been elected as a Fellow of the American Institute for Medical and Biological Engineering, and has been the recipient of the Clemson Award from the Society For Biomaterials and the CRS-Cygnus Recognition Award from the Controlled Release Society. He served as Co-Chair of the Gordon Conference on Drug Carriers in Medicine and Biology in 2010. He has also been awarded the College of Engineering’s Faculty Innovator Award, the Distinguished Teacher and Mentor Award from Bioengineering, and an Honorary Award from the College of Engineering’s Minority Science and Engineering Program. He has also been elected to the Washington State Academy of Sciences. Ionogels are an emerging class of soft materials based on polymers swollen with ionic liquids. These materials bear many similarities to hydrogels, but additionally offer low volatility, ionic conductivity, and thermal stability. We have developed ionogel inks based on self-assembling triblock copolymers in ionic liquids for direct-write 3D printing. Our approach relies on shear-thinning ionogels that can be extruded to afford self-supporting gel constructs. After a brief UV cure, the printed objects were transformed into mechanically tough, transparent structures that were ionically conductive. Upon application of stretching and twisting loads, the 3D printed objects exhibited detectable changes in the conductivity. These ionogels were further used to create 3D printed objects that responded to mechanical activation, wherein the objects changed shape or color in response to an applied load. The ionogels investigated can afford 3D objects that may be applicable toward fabricating sensors and other devices with unique architectures.

Alshakim Nelson is an Assistant Professor in the Department of Chemistry at the University of Washington. He received his PhD in organic chemistry from the University of California, Los Angeles in 2004, where he worked with Sir J. Fraser Stoddart on carbohydrate-containing polymers and macrocycles. He was then an NIH postdoctoral fellow at the California Institute of Technology working for Professor Robert Grubbs on olefin metathesis catalysts for the formation of supramolecular ensembles. Dr. Nelson joined IBM Almaden Research Center in 2005 as a Research Staff Member where he focused on the synthesis of nanomaterial building blocks that enabled large area nanomanufacturing via self-assembly. In 2015, Dr. Nelson joined the faculty at the UW, where his research group focuses on the synthesis, characterization, and processing of stimuli-responsive hydrogels for 3D printing. Dr. Nelson has over 40 publications and 11 issued patents. His honors and awards include recognition as an IBM Master Inventor, ACS PMSE Young Investigator, Kavli Foundation Fellow, NSF CAREER award, and 3M Non-Tenured Faculty Award. Many semimetals are layered and can be exfoliated, although only graphite has been studied extensively down to the monolayer limit. Our group at UW been studying a second layered semimetal, WTe2, in this limit, and I will summarize our experimental work on it. In sharp contrast with graphene, WTe2 has strong spin-orbit coupling, low symmetry, and band inversion, making it a good host for topological physics. We discovered that the monolayer bears the signatures of a two-dimensional topological insulator, with helical conducting boundary modes. We have made recent progress in determining the spin-orbit coupling in these boundary modes and in coupling them to magnets and superconductors. We also found that the electronic state in the 2D bulk (away from the edges), which becomes insulating below 100 K, is close to a superconducting state and a transition to superconductor can be induced just by applying a gate voltage. In addition, we found that bilayer and trilayer WTe2 is ferroelectric, with a spontaneous out-of-plane polarization that can easily be switched by applying gate voltages and which persists, remarkably, even when the material is metallic in the plane, making it arguably the first true ferroelectric metal. It is clear that layered semimetals are extraordinarily rich in physical phenomena and we are really only just at the beginning of exploring and understanding them. 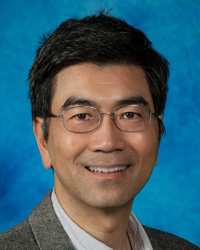 Integrated piezoelectric sensors and actuator systems (IPSAS) built on flexible substrates (e.g., polymers) are an emerging frontier with many revolutionary applications that will significantly advance health, quality of life, and transportation safety. Realization of IPSAS, however, faces numerous challenges, such as precision, miniaturization, customization, system integration, manufacturing agility, throughput, scalability, and costs. This seminar is to demonstrate a novel, scalable manufacturing paradigm that incorporates nanotechnology and additive manufacturing to produce IPSAS.

Dr. I. Y. (Steve) Shen is a Professor of Mechanical Engineering Department of the University of Washington. He received his BS and MS degrees from National Taiwan University, and his Ph.D. degree from the University of California, Berkeley, all in Mechanical Engineering. Dr. Shen’s research areas are vibration and dynamics with a special focus on biomedical devices, PZT thin-films sensors/actuators, advanced manufacturing, autonomous flying vehicles, and high-speed precision machinery. His research has been a synergistic collaboration with brilliant researchers from material science, medicine, dentistry, and biology from academia and industry.

Dr. Shen is a Fellow of American Society of Mechanical Engineers (ASME). He has served as the Technical Editor of ASME Journal of Vibration and Acoustics from 2014 to 2019. He is also the 2017 recipient of ASME N. O. Myklestad Award, which recognizes major innovative contribution to vibration engineering. A climate-resilient water infrastructure must include distributed treatment and utilization of non-traditional water sources. A particularly attractive and widely available non-traditional source is low-salinity brackish water—the effective desalination of which can generate new freshwater supply. While electrically-driven desalination offers desirable energy efficiencies for brackish sources, the existing technology options suffer from either high cost, low capacity, or limited lifetime of electrodes. There is hence a need for suitable, affordable, and robust electrode materials for desalination. In this seminar, I will provide examples of designing electrodes for modular, electrochemical treatment technologies suitable for distributed brackish water desalination. In particular, I will discuss promising results from in-device tests conducted with two types of electrodes: functional composites made from commercial resins and electrodes based on intercalation compounds.

Chinmayee Subban is a Research Scientist at Lawrence Berkeley National Laboratory. Her research is centered on synthesis, characterization, and in-device testing of materials relevant to electrochemical systems. In particular, Chinmayee is keen on translating fundamental research insights into developing new water treatment technologies. Her prior research focused on novel electrode materials for energy technologies such as Li-ion batteries and hydrogen fuel cells. She earned a PhD in Chemistry from Cornell University and a B.S. in Chemistry and Biology from Linfield College.

Novel Materials and Processes for Unlocking the Future of Soldier Protection High performance boride- and carbide-based ceramics and high strength polymeric fiber-based composites have revolutionized dismounted soldier protection systems due to their unique blend of properties and extremely low densities. Over the last few decades, the advent of innovative processing techniques and the sourcing and synthesis of high quality materials have yielded significant performance improvements to the ceramics and composite fibers for these body armor systems. However, with increasing need for lighter Soldier burden and improved performance, there is a need to continue to drive toward enabling disruptive capability in both materials and materials design. For the past three years, the researchers at CCDC ARL have been pushing the envelope for development of novel ceramic materials and composite materials, advancement of experimental characterization techniques at varying spatial and temporal scales, and our newest approaches with additive manufacturing-based methods to enable hierarchical design in ceramics. The purpose of this presentation will be to provide a review of these research efforts, in addition to discussing my personal experiences as an engineer in the civil service.

Dr. Lionel Vargas-Gonzalez is the Deputy Program Manager for Physics of Soldier Protection to Defeat Evolving Threats (PSPDET), an Essential Research Program (ERP) for the Combat Capabilities Development Command’s Army Research Laboratory (CCDC ARL). He is a lead subject matter expert for materials and processing science for dismounted Soldier ballistic ceramics at ARL, and Army-wide as the ARL Torso Protection WIPT lead for the Army Ballistic and Blast Community of Practice. In his tenure at ARL, he has worked in a variety of program efforts involving various lightweight Soldier materials (ceramics, metals, polymers), surface science (surface functionalization through plasma), adhesion of dissimilar materials, and materials processing science for mass-efficient head protection and body armor. He received a B.S. in Ceramic and Materials Engineering in 2004 from Clemson University, and a Ph.D. in Materials Science and Engineering in 2009 from the Georgia Institute of Technology.